The PATH Variable in UNIX

After reading this document, you should know what the PATH variableis, how to set it, and how to view the directories currently therein.

When you type the command

, the shell dutifullyexecutes the command and returns the results to you. During thecourse of a terminal session, you type more commands. These includethings like

, so on and soforth. But where do these commands come from? Obviously, they'reincluded when you install the operating system, but where are they?

will tell you the full path to abinary it's about to execute. For example:

That means that the exectuable for the command

, you can type in thefull path to the command:

It seems like there's a bit of magic going on here, however. How doesthe system know that

? The waythe system knows is the

First, what's an environment variable? It's a variable that persistsfor the life of a terminal session. Applications running in thatsession access these variables when they need information about theuser. To see a listing of all the environment variables, execute thefollowing:

The name of variable is

and the contents of thatvariable is

. Another way to see the contentsof an environment variable is to do the following:

The PATH environment variable has a special format. Let's see what itlooks like:

-separated list of directories. Whenyou execute a command, the shell

searches through each of thesedirectories, one by one

, until it finds a directory where theexecutable exists. Remember that we found

is the second item in thePATH variable. So let's remove

. We can do this by using the 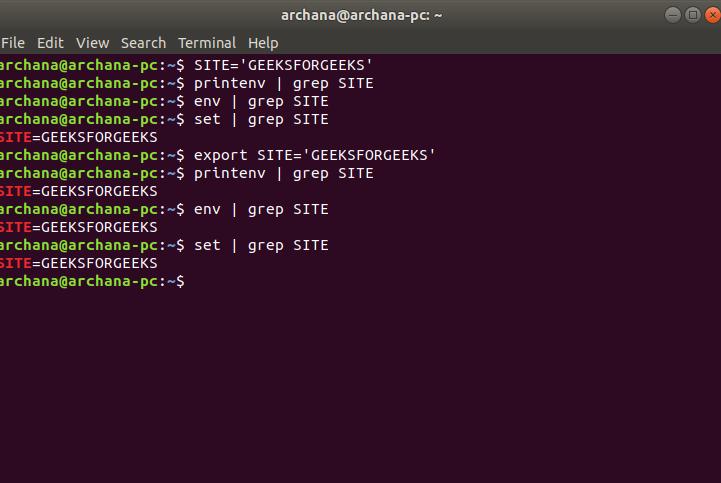 Make sure that the variable is set correctly:

Now, if we try to run

, the shell no longer knows tolook in

can no longer be found. Let's add

is avery useful thing to have.

.First, let's see what the current

a directory is as follows:

. Let's see if it got updated:

Making this happen every time you login

There's a special file in your home directory called

In UNIX, a convention is that files beginningwith

are configuration files, and thus should be hiddenfrom view.

At any rate, this file (.bashrc), simply contains a list of commands.Each one of these commands gets executed every time you create a newshell.

Every time a shell is started,

. If you wish to have certain directoriesautomatically added to

, simply place those commandsat the end of this file. Log out and log back in to view the changes.Alternatively, you can load the contents of that file in the currentsession: