Splice has been the main arsenal of many music producers sometime now. Even for many hobbyists, a combination of almost bottomless on-demand sample libraries and rented plug-ins is easy to sell. Now, the company is expanding its horizons with two new subscription plans: Creator and Creator+.

Like it's Sounds+ subscription, the two Creator plans include access to Splice's library of soundpacks and samples, plus credits to use in the store. But the big additions are a pair of virtual instruments developed by Splice — Astra and Beatmaker — as well as a collection of educational videos called Skills.

Obviously the new plans are a bit more expensive. Where as Sounds+ will set you back $10 a month, Creator and Creator+ are $20 and $30 respectively. The only real difference between the Creator and Creator+ subscriptions is that you get 500 sound credits with the latter and 200 with the former. (Sounds+ only gets you 100 credits.) Honestly, even if you're a professional and producing dozens of tracks a month, 200 samples a month is probably plenty.

All of the plans also include the new Splice Bridge plugin. It's not quite the deep integration with your DAW than many producers were probably hoping for, but it's definitely a step in the right direction. When you add it to an empty MIDI track it automatically syncs the BPM with the Splice desktop app allowing to you timestretch and tempo match a loop before you copy it over to your DAW.You can also transpose a sample to match the key of your track, but unfortunately Splice can't automatically detect what key you're in. Still, the ability to do some simple sample manipulation before you spend a credit on a sample is welcome. 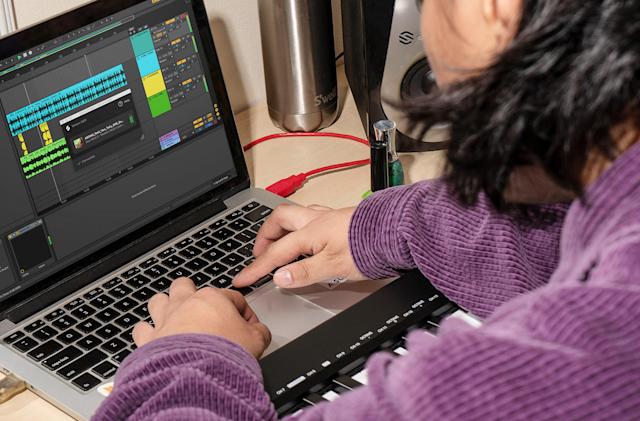 The two Creator-exclusive plugins are potentially pretty interesting. But I don't know that I'd say they're worth $10 extra a month on their own. Astra is a surprisingly deep virtual synth that reminds me a bit of Arturia's Pigments. There are two oscillators with options for virtual analog, FM, wavetable, granular and sample playback, a sub oscillator, a noise source, a multimode filter, two LFOs, two envelope generators, a 32-step note sequencer, a 32-note macro sequencer, a pretty robust modulation matrix and built-in compress, reverb and delay effects. I had a load of fun tweaking it and building strange bass sounds but it definitely has a bit of a learning curve and a lot of the presets are pretty ho-hum.

Beatmaker, well, allows you to make beats. It's a super stripped down rhythm machine that is in many ways the antithesis to Astra. It comes preloaded with a bunch of drum kits ripped from classic drum machines or focused around particular genres like trap and pop. (Of course you can also load your own samples... I hear Splice might have a few.) You can play them in pad mode or switch over to the incredibly intuitive 32-step sequence. Each step is a bar that you click to turn on and drag up or down to change the velocity. There's even a quick randomization feature for when your hihat grooves start to feel a bit stale and quick fill options for things like four-on-the-floor and offset eighths.

For me though, it's the Skills that might make the Creator subscription stick. I'm one of those obnoxious people who spends almost as much time watching videos about music making as I do actually making music. So having lessons on sample flipping, processing vocals and mixing techniques always at the ready is definitely appealing. The lessons include instructional material too, like project files for Ableton and samples to manipulate. The production quality is excellent, but I do wish some of the lessons were a bit meatier. The Mixing 101 course for instance feels a bit rushed. All of the clips there are under 10 minutes long, and many of the under five.

Splice has proven that it knows what producers want and makes it an integral part of the lives of many musicians. Now it is trying to develop and prove that it is not just a sample shop, but a complete music production ecosystem.